HOUSE OF THE WOLF MAN: A review 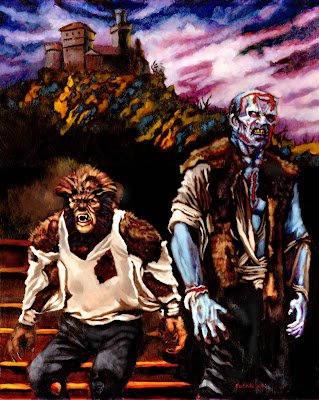 Above: Promo artwork for House of the Wolf Man by the talented Chris Kuchta. Source found here.


Old horror movies, and movies made with an obvious love of creature feature classics, (like The Monster Squad) are my bag, man.

My opinion of the new "old" film House of the Wolf Man ? Man, it's a mixed bag!

The plot of this black and white homage to the horror hits of yesteryear, according to its IMDB page, is "Five strangers are invited to a castle under the pretense that one may inherit it. Little do they know what dangers await at the House of the Wolfman." There's also a curse, mad science, and some dark family secrets waiting to be exposed, too.

Bad news (as I see it) first: the writing, direction, and acting are very uneven. The writing is generally pastiche Universal Gothic, which is a plus. I like my horror old-fashioned, very much so.

But the script reminds me less of The Cat and The Canary, The Old Dark House or any of the Frankenstein and Wolf Man movies, which is what I think it shoots for, than lesser efforts like Horror Island and the 1941 The Black Cat (with, wisely, less "comedy relief.") Throughout, the acting ranges from bad to well done; a better consistency in the performances would have helped. Too, not all of the performers seemed to be experienced professionals. However, the actors Dustin Fitzsimons (playing the young male lead "Reed Chapel"), Jeremie Loncka (the bespectacled brainiac "Conrad Sullivan") and Cheryl Rodes as the sexy "Elmira Cray" showed the most skill as performers, I thought, and I enjoyed watching them work their craft.

I found myself occasionally wishing that the camera moved more. My impression, after only one viewing, was that wasn't as much camera movement as in films like Bride of Frankenstein or other classic horror films. Not a huge distraction, but it registered. But there's not a LOT of camera movement in good television series either, and as most people are going to see this on a smaller screen, it's probably the complaint is a minor one.

The movie includes sly visual references to the original The Wolf Man, and presents a story that would fit into the classic Universal "universe." Some of the script elements indeed honor the best traditions of old Universals. But sometimes, sadly, the worst as well.

For example, there was some not-very-funny comedy relief, and a couple of examples of outright send-up: an African native character actually says "Cowabunga, oomgowa!" at one point, and another African native character sees a monster and we are shown a closeup of him doing a "Buckwheat"-style, big-eyed, jaw-dropping take. And in a climactic fight, we see the stone walls of the castle shake when hit three times.

I think these things were included to make the film more "authentic," in a sense--but I feel it was a mistake not to scrap them. Fans can forgive such bad choices and bloopers in old movies, but who wants them included in a NEW film trying to be like the horror classics of yesteryear? I don't, and my wife felt the same way. They pushed the film briefly into parody, not pastiche, and as the film is apparently intended as a tribute to the classics, they're out of place. (Again, IMHO--your mileage may vary.)

The scenes of actor and Lugosi impersonator Michael Thomas as Dracula don't make up much more than a cameo, and his last line is the end of the film. Unfortunately, the line isn't very dramatic, and I thought all the momentum of the film evaporated with his last scene, making for an unsatisfying coda.

Now the GOOD news! The lighting, the sets, the set decoration and props, costumes, makeup, and fight choreography are ALL excellent. It looks much better than I expected. (I'm guessing it was shot on hi-def video; it was presented in digital projection.) When there are so very few new movies to see in "glorious black and white", it is wonderful to see one done with such care.

The musical score by Nate Scott is a fantastic asset to the film ; an evocative piece of composition that aids in creating mood and tension.

There are two scenes in the film that will stand up to the test of time, and remain in the memories of viewers. The first one involves a mysterious, badly disfigured character revealed in a hidden room. It was one of the creepiest scenes I've ever seen, and I thought one that Browning would have been proud of. The other is the film's climactic fight between the Wolf Man and Frankenstein's Monster--it is what the fight in Frankenstein Meets the Wolf Man SHOULD have been! Great choreography, editing, and camera work come together to make it marvelously memorable. I loved it.

So House of the Wolf Man, if I had to rank it with any of the Universal monster movies, would be somewhere between House of Dracula and Frankenstein Meets the Wolf Man in quality. Which is fitting, I suppose, because it mostly goes in for a 1940s Universal flavor. Too bad that was a lesser decade for GREAT horror films! Still, if only for the look of the film, the music, the makeup, and the two scenes I pointed out for special praise, you should go see it.

Another, more positive review, can be found HERE.

Chris Kuchta's website is here.
Posted by Max the drunken severed head at 4:14:00 AM

Thanks Max for the very thorough and fair review. I'd like to rent this movie when it comes out on DVD.
best,
r/e

Thanks for the review. I've been eagerly anticipating this movie since I heard about it.

You're welcome! I'll be curious to read your thoughts on it when it comes out on dvd.

honestly i have to disagree, i thought all the performers were fantastic. If you look closely at archibalds acting technique and mary chapel technique both actually more in tune with the classic quirks of that era. subtle things like haha marys flaggin arm as shes wisked away. classic! i luved everybody and i dont think the director would of had tthe movie turn out that way if he didnt want each and every actor to do what they did on screen.

Thanks for sharing your comments, lilmoviebuff!

You've GOT to be kidding!!!
The Universal films were mostly all CLASSIC!
To compare this to Frankenstein Meets The Wolfman OR House of Dracula is like comparing Battlefield Earth to Avatar!!!
This is like a 40th rate A&C meets the monsters!
What acting...? Good makeup on monsters tho-besides the 99 cent store brides of Dracula...

Clearly, people disagree on HOTWM. (Quite a bit!) But I think my review is a fair one.