"The horror! The horror!" Those are the final words spoken by the cruel, powerful character "Mr. Kurtz" in Joseph Conrad's book, Heart of Darkness. I've been thinking of this line lately, having recently watched a dvd of movie bogeyman Boris Karloff playing Kurtz in a 1950s TV adaptation of the novel. (And because I've been working on a review of that performance for a coming post.)

But today I'm reminded of the line because of the words coming out of the mouth of a contemporary Kurtz of the airwaves. A man who also has a horrible influence, and like Kurtz, he revels in his lack of compassion, and wants to corrupt others to be like himself.

Today I am so confounded and distressed by this man that I can't post something that's written solely for laughs. Ironically, though, I am referring to a guy who works as an entertainer, a clown. Nowadays, of course, clowns are seen as more frightening than foolish, but this clown is both: 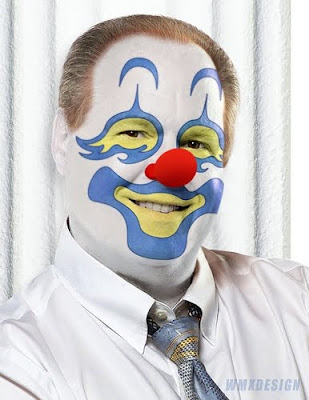 I may describe this bozo as a clown, but he isn't a good one. A good clown should be silly. This man is sickeningly absurd.

Let me reassure my regular readers--I dislike having political topics here at TDSH. I prefer to focus on anything else. I'd far rather talk about and share the uncanny, the strange, and the kooky here. And the scary.

But--but but BUT--the following statements (on aid to the Haitian earthquake victims) have gone so far below the bar of common civility--a bar none too high already-- that I'm actually afraid of what awaits our country in the future:

"...President Obama speaking about Haiti this morning in Washington at the White House. He held a press conference. Now, I want you to remember, it took him three days to respond to the Christmas Day Fruit of Kaboom Bomber, three days. And when he came out after those three days, he was clearly irritated that he had to do it. He didn't want to do it. He comes out here in less than 24 hours to speak about Haiti.

"Oh, this is what he lives for. He lives for serving those in misery."

"So the country that he runs around the world apologizing for, the country that he has chip on his shoulder about, he now turns to as its president and asks people who have lost their jobs because of his policies to donate to WhiteHouse.gov to the people of Haiti, and we will do it."

"This will play right into Obama's hands. He's humanitarian, compassionate. They'll use this to burnish their, shall we say, 'credibility' with the black community -- in the both light-skinned and dark-skinned black community in this country. It's made-to-order for them. That's why he couldn't wait to get out there, could not wait to get out there."

"If I want to donate money to the Red Cross, why do I need to go to the WhiteHouse.gov page...your name is going to end up on a mailing list for the Obama people to start asking you for campaign donations for him and other causes.

"Besides, we've already donated to Haiti. It's called the US income tax."

Have we become so divided politically, so afraid of trusting others, that no amount of cynicism, or callousness in the face of suffering, is too shameful to share in public? Is the spirit of commonality that we felt in the wake of our own suffering on 9/11/2001 so forgotten that it can't share it when disaster strikes outside our borders? Is that where we are headed?

To attack the President in his capacity as a politician is perfectly fair; it can even be a civic good. But to attack our chosen leader for leading our country's humanitarian response to a disaster is monstrous. (That's an adjective normally used in a positive way at TDSH.)

Boris Karloff, the man I grew up thinking of as the "King of Horror," hated the use of the word "horror" to describe frightening movies and books of the day. In his introduction to his 1943 anthology Tales of Terror, "Horror carries with it a connotation of revulsion which has nothing to do with clean terror." He was right. The political comments I quoted above actually horrify me, more than they frighten me. But because they reflect more than the feelings of a few fringe radio ranters, I'm scared as well as disgusted!

Well, if you've made it this far through this post, you deserve a cheap laugh. So here's photos of a boob and a poo: 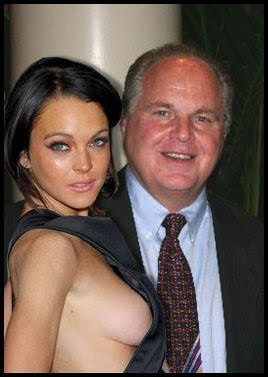 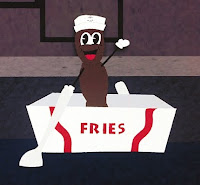 Above to the left, we see a boob...and Lindsay Lohan standing next to that boob. The second picture, on the right, shows the only TV character with less dignity than that boob. (But not much less!)

You'll notice I've never said the name of the celebrity commentator I'm criticizing anywhere in this post. That is because names are said to have power and influence, and this scary character (no resemblance to a real person, living or dead) doesn't deserve to have any, any longer.
Posted by Max the drunken severed head at 1:30:00 AM

I'm speechless. There are too many clowns ranting and raving and stirring up emotional ire and false thinking. Mr. pill-popper is the last person to open his mouth. He makes us look so stupid to the rest of the world.

Max, as you know, I am a confirmed Independent Centrist. I voted for Obama, but under different circumstances, might have voted for McCain.

I say this, only to prove that I don't believe that - as a group - neither Democrats nor Republicans, Conservatives nor Liberals, are demons.

This SPECIFIC man, though, has proven himself, by his own words and actions over many years, to be a profoundly selfish, self-centered, wholly self-aggrandizing, self-worshipper.

And as such, his words are of absolutely no profitable use to anyone beyond himself.

Thanks for your comments, guys.

Thanks for this post. It is good to hear that other people feel the same horror that I do when I hear how that man talk. I have traveled abroad often, and am constantly surprised how the words of several very cruel people seem to define our great country. Very sad. Thanks for sharing.

Thank you for so eloquently putting into words what a lot of us are thinking. Well done, sir, well done.

I think that Rush's minions need to see A Face in the Crowd... though I wonder if they'll "get it".

I think he was just jealous of all the hate mail Pat Robertson and Jay Leno were getting.

Okay, time to take your blog off my reader. It was fun while it lasted.

Thanks for your comments and support.

Joe--Sorry to lose you over one atypical post. You are unable to imagine having fun here without perfect consistency...?

"A Face in the Crowd" is a classic that oughtta be required viewing in college. Makes some powerful points!

Now I'm annoyed with David Broder, too. His timing is terrible.