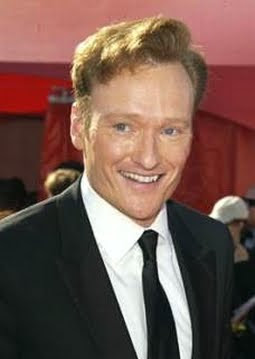 Conan O' Brien stepped down as host of The Tonight Show with grace and wit tonight, and provided a memorably energetic, fun final episode for viewers. It was a bittersweet end to a stupid screw-up by NBC, and a fine farewell to his fans.

I'll miss him. No past host of any late night talk show has been red-haired AND featured Frankenstein as a recurring character! And no future host is ever likely to be a fellow "carrot-top" and Frankie fan!

Frankenstein (actually, his Monster, of course) would usually appear in a repeat bit called Frankenstein Wastes a Minute of Our Time. Frankie was enthusiastically played by comedy writer Brian Stack as a big smiling man-child with a childlike fascination with trivial things around him. (Hey--that kinda describes me and my blog!)

Stack describes the creation of the repeating bit in this video round table of comedy writers. He also relates a funny encounter while in the monster makeup with legendary news anchor Walter Cronkite! 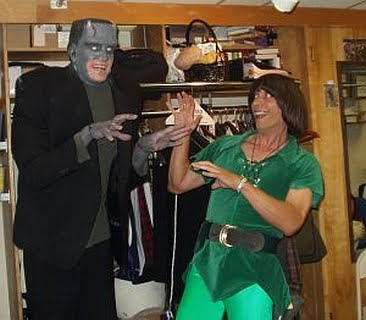 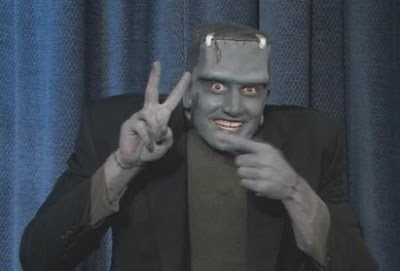 This bottom pic of Stack as the Monster comes from "The Ten Greatest Conan O'Brien Characters of All Time" at the site Manofest.com. On the same page you can watch one of the Frankenstein Wastes a Minute of Our Time segments from O'Brien's earlier program, Late Night With Conan O'Brien.

As Conan mockingly says in the clip about the show (and it applies to his Tonight Show as well), "When you got Frankenstein, you know you got the goods." How right you were, Conan!

Related Link: A podcast of Stack discussing his career, and the characters he's played--including Frankenstein--can be heard or downloaded here.

I love Conan but in all honesty, had a bad feeling about him hosting the Tonight Show.
He's different. Don't get me wrong.. different is good! I just didn't have a lot of faith that he would be able to win over the Jay Leno fans.

Conan rocks and no matter where he lands, I will follow him. :)

Don't worry, they'll still have a freaky-looking dude on the Tonight Show. As an added bonus, he'll be monstrously unfunny!

Pimpbot 5000 was one of the greatest robot creations of all time. I miss that shiny, perverted bastard.

I miss the Chuck Norris lever, too. I always thought they should re-release the "Walker Texas Ranger" series on DVD with audio commentary by Conan. That's the only way they're going to get my hard earned money for that goose egg.