Would you have sex with a ghost? 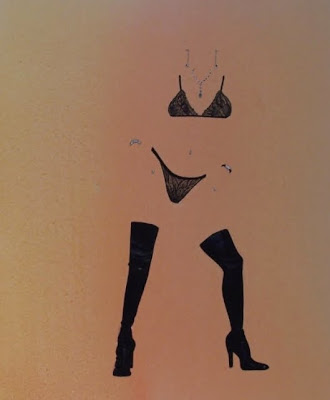 
Recently, in a Richard Armour book titled Nothing Risque, Nothing Gained, I read this joke:

Did you hear about the woman who had sex with a ghost?
She didn't know she had it in her!

Then, at the site Sodahead, I saw the poll question "Would you ever have sex with a ghost?"

That's a poser. I haven't made up my mind whether I would or not--sure it would be "spiritual" sex, but I think you'd be unsatisfied. Anyway, if you register at the site, you can answer the poll question yourself, and then read the 116 comments the poll provoked. (Or you could answer the question here by leaving a comment.)

Also found at the site was this ghost cartoon (click to enlarge, the text is tiny):

So, I've been goin' around tellin' Armour's "ghost sex" joke everywhere, and most people seem to like it--I get more smiles and laughs than groans or eyerolls.

But it would flop in Japan, where they have public competitions of what appears to be "doin' the nasty"with a ghost. Because there they have air sex contests. That's right, a cross between sex and "air guitar"--and it looks like nothing so much as poking a spook.

The link above will take you to the site Tofugu, which has a video of this "intimacy with the invisible" sport. Aw, go ahead, it's good for an "oh good gawd" sort of laugh!
Posted by Max the drunken severed head at 1:51:00 AM

air sex??!!! lmao!
i'll have to check that out later when there's no little munchkins around!