At least, I hope so! Today I received a press release that's got me excited about a coming new show: 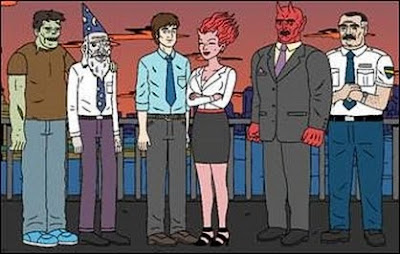 Comedy Central Gets Ugly This March With The Premiere Of “Ugly Americans,” A New Animated Comedy

This animated horror-comedy series follows one Mark Lilly, social worker at the Department of Integration, as he helps new citizens both human and "other" adapt to hectic life in the Big Apple. There are easier tasks than weaning vampires off of blood, socializing land-whales, and housebreaking werewolves, but Mark is up to the challenge. Between his stressful job, a zombie roommate, and a demon ex-girlfriend, Mark's lucky if he can sneak in a few minutes of sleep. But who can sleep when there's a drop-dead gorgeous Mermaid sitting at the bar?

"Ugly Americans" was created by Devin Clark and developed by David Stern. Executive Producers are David Stern and Daniel Powell, with animation by Augenblick Studios and Cuppa Coffee. Premieres on Comedy Central on March 17th at 10:30pm (9:30 Central), right after a new episode of “South Park."