In January, when we had NORMAL snowfall amounts here in Pittsburgh, I saw an interesting image plastered around town. From my point of view, it was a captivating face from a work of art : 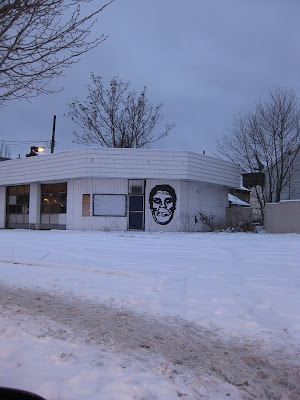 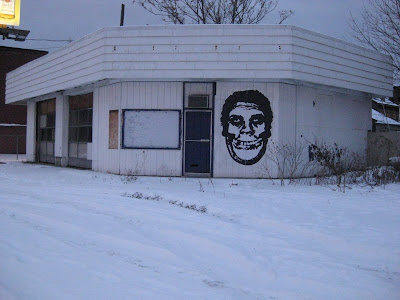 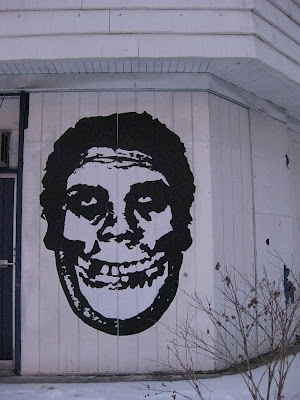 You're looking at a decal-and-stencil piece by famous graffiti artist Shephard Fairey, creator of the famous "HOPE" poster for the 2008 Obama campaign. Fairey'd had a show at the local Andy Warhol Museum late last year, and received the blessings of Pittsburgh city leaders to plaster his work on abandoned properties. The face in the photo is a combination of Fairey's ubiquitous "Obey" image seen in urban areas around the globe, and which was based on a photo of the late wrestler Andre the Giant-- and the image of the Crimson Ghost as used by the band The Misfits. (The skull is a mask worn by the criminal "the Crimson Ghost" in an old film serial by the same name.)

The bony but powerful visage made me think of Mary Shelley's description of her monster, lacking mainly the yellow complexion of the skin. From Frankenstein: "His yellow skin scarcely covered the work of muscle and arteries beneath; his hair was of a lustrous black, and flowing; his teeth of a pearly whiteness; but these luxuriances only formed a more horrid contrast with his watery eyes, that seemed almost of the same colour as the dun white sockets in which they were set, his shrivelled complexion, and straight black lips." 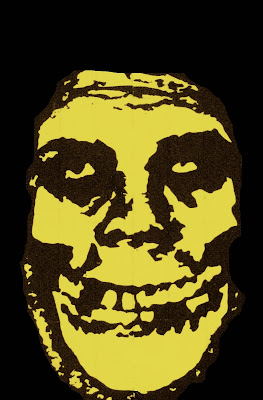 This is how I saw the art in front of me-- which made me smile. To have a surprise appearance by my favorite fictional character made my whole day!

Sadly, the photos above were taken in the nick of time. The image was painted over with white paint the next day. It was like going back to see a snowman, only to find he had melted.
Posted by Max the drunken severed head at 1:10:00 AM

The Vicar of VHS said...

I never thought of it before, but Andre the Giant would have made an EXCELLENT Frankenstein's monster! His performance in THE PRINCESS BRIDE always makes me smile. Talk about your missed opportunities!

Wow, thanks for sharing that with us! Amazing idea. He found the perfect time and place to put that pieces!

Hmm, looks like there's a light on in that abandoned property. Let's investigate.

Why are you posting images of me in my bathroom mirror having a shave every morning?

How are you getting these images?

Glad you caught it before it was painted over.

That's too bad that it was painted over!
Why would someone paint over it when he had the city's blessing... ???

Sheesh! People are so miserable.
I do see Andre The Giant's face in there.
Very good. I like it a lot.