I came across this comic book panel yesterday while surfing the web (Cowabunga!), and my first thought was: "These are MY people!" 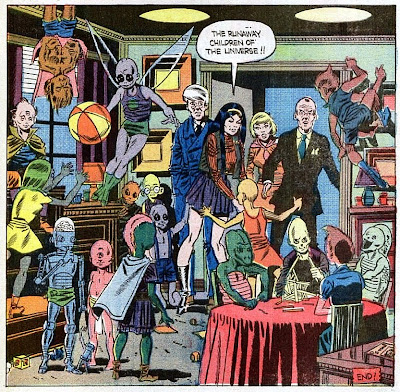 I've always been an oddball among oddballs.

But it reminded me too that as a kid I used to buy Midnight Tales, an anthology comic published by the notoriously Cheap-with-a-capital-C Charlton Comics Group. MT was mostly horror-oriented, but the cover always had a gag, and a wrap-around story that introduced two or three spooky or sci-fi stories. The wrap-around stories always ended with a gag, too. 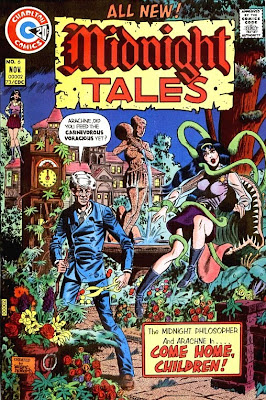 The white-haired gent and raven-haired babe you see above were Prof. Coffin and his daughter Arachne. These characters, whose investigations of reports of the strange and supernatural, which were part of the wrap-around story, were the only continuing characters from one issue to the next. 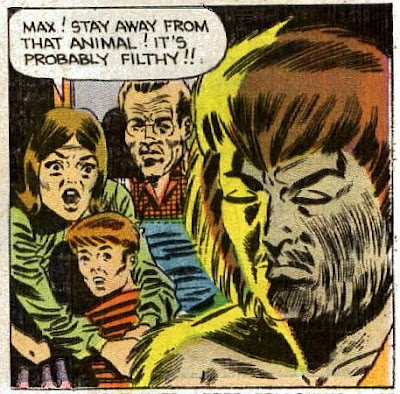 --and also reminded me of the time when I was 16 and wanted to date someone outside my race. (No, I'm not comparing the bearded woman above to any group.) Just that my choice was NOT exactly welcomed by everyone closest to me.

Finally, I remembered an MT story that I could use to fulfill the request of one Drunken Severed Head reader, Greg S. of Pittsburgh. He asked to see a "weretuna." Having poor Photoshop skills, I thought of a character from one ish of Midnight Tales who looked llike a "wereporpoise," and I think that's close enough:

The character is actually a mutant, but who's quibbling? Anyway, I hope Greg is satisfied.

Okay, back to reading trash.
Posted by Max the drunken severed head at 4:26:00 AM

The Vicar of VHS said...

What a fun post, Max! I remember reading some oddball Atlas comics in my youth that also had some weird-looking creatures on the cover--I think it was the first ish of an aborted super-hero team who were all some kind of scientific freaks--but as far as I know it was never turned into a series. I remember a mad doc with a face like Large Marge from that Pee-Wee movie, though, that haunted my young dreams.

Anyway, I'd love to see some of these MT issues, especially if there's more Arachne. Yes--THAT sad. :P

MIDNIGHT TALES is kinda unique, even for Charlton - it was the ONLY time they allowed a single creator to totally run a book.

That man was the late (just recently) AFRICAN AMERICAN comics artist & writer (which was rare then), Wayne Howard.

Wayne used his fun "Woody Style" here (though it was a little TOO Woody to make the real Wally Wood happy; Wayne had been one of his many assistants.)

I remember Midnight Tales but I don't think I ever bought a copy. I'd forgotten about Wayne Howard and his "Woody" style.

My favorite Charlton comic was Joe Staton's "E-Man." I also bought some of those really crappy David Cassidy and Bobby Sherman ones just for laughs. And also some of the drag racing ones.

Max, that cartoon makes absolutely no sense. Who the heck would tell a wereporpoise to put on a parka. Sheesh!