So I was thinking recently about awards, and I thought about the fact that there are inept film abortions that have a certain je ne sais quoi that makes people want to watch them more than once despite the fact that are probably far better films that are more rewarding.

Films like Melody Ranch, an old Gene Autry musical Western with brassy vaudevillian Jimmy Durante and flashy hoofer Ann Miller as Gene's sidekicks. (OMG!) Or certain Bert Gordon or Jess Franco films. Or Waterworld. I thought to myself, "They aren't really cinematic pieces of shit...there's something worthwhile and enduring about them. Hmmm. They're...fake shit. No, they're sham poo. And suddenly I realized sham poo films are ones that ought to come with the instructions, "Watch. Wince. Repeat."

With that in mind, I thought I'd start handing out the TDSH Sham Poo Awards for such faux film feces. Being too ill to write up the one I had in mind, I asked John Cozzoli of the Zombos' Closet of Horror blog to submit his nom for the award. So take it away, John!
_________________________________
If you are looking for the perfect second-half of a double bill Halloween show with Plan 9 From Outer Space, look no further. Spookies is a film to be savored for its underdone acting, overbearing dialog, and incoherent story. So rarely do horror films reach the pinnacle of hilarious WTF ineptitude this film achieves so grandly. Originally begun as Twisted Souls, that unfinished film died and gave birth to a spook show hodgepodge of '80s makeup and monster effects that collide head on with badly-edited additional footage from another unfinished film, creating a two-headed storyline that never meets eye to eye.

Everybody winds up at a deserted spooky house surrounded by a cemetery, a dead sorcerer is trying to resuscitate his reluctantly dead bride, and one by one, the blundering bunch of bickering idiots get taken out by one monstrosity after another. Interspersed between each tableau of gory doom, the sorcerer gloats, speaks in a Lugosi-styled accent that's as bad as his makeup, and summons forth more creatures of the night. And each time someone scrambles to get out of a room we cut to his evil assistant, a purple werewolf, holding the door closed so they can't open it. Yes, a purple werewolf.

Zombos' Closet of Horror is nominated for a Rondo Hatton Classic Horror Award for "Best Blog."

Below: The poster for Spookies; art by noted genre artist Rich Corben. 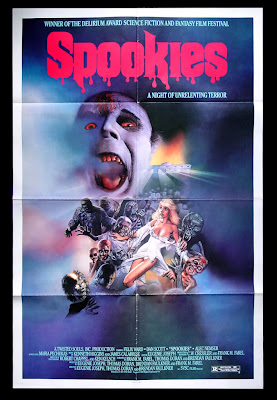