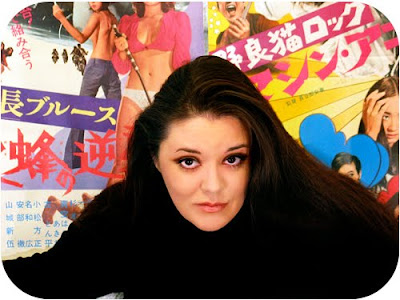 Above: Kimberly Lindbergs. Below: KL with the Pigumon monster from Ultraman. 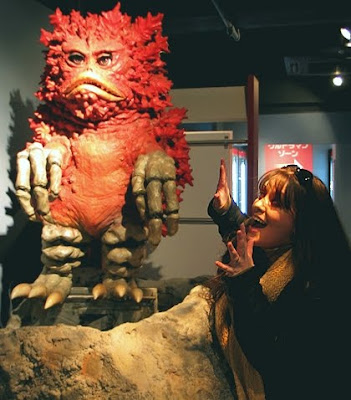 Life is so unfair, and that's a fact. Just look at the beautiful woman in the two pics above. That's Kimberly Lindbergs, the writer behind the amazing Cinebeats.

Sheesh! You probably read her blog frequently, and say to yourself, "Self, why does one person get so much in the way of looks, intelligence and writing skill when *I* HAFTA LOOK LIKE A GNOME AND SWEAT TO PRODUCE A MIDDLIN' BLOG LIKE THE DRUNKEN SEVERED HEAD??!!"

Or is just me?

(I must say, I do look like a cuddly gnome, at least.)

Anyway, my first set of "Rondo rondo" questions were sent to her, but I didn't hear back. So I sent the second set. No reply came back-- at least not by the deadline I mentioned. Until today! Seems my messages got sent to her e-mail's trash folder. Talk about an advance in artificial intelligence!

As before with the responses from all the other Rondo Award "Best Blog" nominees, TDSH is lucky to have her here. So without any further delay for fol-de-rol from me, here's Kimberly Lindbergs' answers to BOTH sets of "Rondo rondo" questions!
_______________________

Why do you think you were nominated?

I'm not exactly sure to be honest but I suspect it's because I love horror films and I occasionally write about old movies that a lot of other bloggers don't cover.

Let's say you win. What will be the first thing you do?

Be very, very surprised and then quickly thank the voters.

Let's say you DON'T win. What will be the first thing you consume to console yourself?

Other than B-horror movie actor Rondo Hatton, who do you think the award looks like?

What person you've never met has been the biggest influence in your interest in horror?

Without a doubt the deceased horror host of Creature Features, Mr. Bob Wilkins.

What should I wear to the award ceremony?

Nothing. Let it all hang out and show the world the real you!

Which would rather have-- a place in the Guinness Book or a Rondo? If the former, what category would you appear in?

When I was about 9 years old a friend and I tried to win our place in the Guinness book by staying up in a tree for as long as possible. We only lasted about 12 hours until our mothers forced us to come down but for years afterward I was disappointed in myself for failing to make into the Guinness book. At this stage in my life I'd much prefer to win a Rondo award for my writing efforts. Having a bust of Rondo Hatton sitting on my mantel would be an honor.

You got nominated. What do you think your blog avoids doing that annoys people at other blogs?

I have no idea. I tend to write too much and when I do write it can occasionally involve typos, bad grammar and random punctuation mistakes. All these things undoubtedly annoy a lot of people! I can only assume that people come to Cinebeats for the coverage of films, actors and directors that are rarely mentioned anywhere else. I often champion the unknown, the unloved and the forgotten.

What is your super power? How can you use it to improve your chances of winning?

My superpower could be my ability to find something worthwhile to say about films that a lot of people find utterly unwatchable. This is probably what got me nominated in the first place.

Is appearing at TDSH the the lowest point in your virtual life? If not, what was?

Absolutely not. Spending an entire day watching Sims 2 music videos on Youtube was probably the lowest point of my virtual life. And that was mainly due to the fact that a lot of Sims 2 players seem to enjoy listening to Hannah Montana and Lady Gaga.

[There goes all your last minute votes from fans of Miley Cyrus and Lady Gaga!]

Name one change that you think would improve the Rondo Awards.

Name any one food item-- and how many of that item do you think you could stuff in your mouth?

Pocky. I can probably stuff an entire package of Pocky into my mouth at once. Maybe even two!

Would you do that on-camera if it would get you a Rondo?

No. Nobody wants to see that. Least of all me!

What is something you'd say in your acceptance speech?

In honor of Mr. Rondo Hatton himself: "YOU GIVE ME THE CREEPS!"

How might you improve your blog in the coming year?

How about more horror film coverage? I spend 75% of my time watching horror movies but I only devote about 50% of my blog to writing about them.

Really, truly, totally optional question. If not you, who in your category do you hope will win?

I'm going to have to say Curt of Groovy Age of Horror or Stacie at Final Girl. Curt's blog helped inspire my own blog and he's been extremely supportive of me ever since I started. As for Final Girl, Stacie was the first female horror movie blogger I ever came across online and one of the the funniest. Both of them have inspired a lot of other people and they deserve some kind of special recognition for their blogging efforts. I would have said Frankenstenia but Pierre's already got my vote in two other categories so I figured I'd share the Rondo love a bit.

Thanks again Max and best of luck to you with your own Rondo nomination!

And check out my Q & A with other beautiful, smart, talented women like Stacie Ponder of Final Girl, Rhonny Reaper of Dollar Bin Horror, Kerry Kate of Obscure Hollow, and Tenebrous Kate of Love Train For the Tenebrous Empire, who join six smart male bloggers at this post:

A Rondo rondo II: Night of the Nominees


Below is a link to a post with six smart and talented men, so the pics of the nominees may or may not be one of the attractions of the post, depending on what you like. But, as with link above, the answers are interesting and fun:

A Rondo rondo: Nattering With Nominees

First in these interviews, I was and am VERY HONORED to start these Rondo-related interviews with the popular, insightful and talented Joe Moe:

You are slipping badly, Max. Kimberly is much too classy a guest for your blog! Please get back to your usual crappy content asap!!!

I always want to please my readers!