A typical day here at home

Yesterday struck me as a quintessential day for Jane and I. Jane reads a lot, and is now reading Human Sacrifice in History and Today, by Nigel Davies. I'm reading a book on the history of novelty and practical joke items, called Cheap Laffs: The Art of the Novelty Item, by Mark Newgarden.

Late at night we'll watch Craig Ferguson and maybe a classic episode of genre tv-- such as Alfred Hitchcock Presents, which is what we watched most of this past week. Or something from our dvd and tape collection, like some weird old Czech film, or some cult 60s shocker. Perhaps a silent film-- last night we watched two short comedies from 1927, starring nobody you ever heard of.

And maybe we'll worry aloud, like we did last night, whether our pet one-eyed garter snake Plissken, living in a tank near the TV, is eating enough. (He's fine.) It'll just be me, Jane, and our 2 cats on the couch, our gargoyle collection staring down at us from a bookcase. And if it's like last night, it'll be foggy outside. 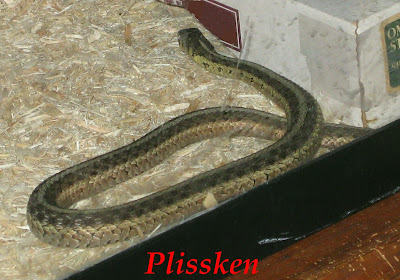 Sounds like a good evening to me.
A one-eyed garter snake? How did he become a pet?

Every post I've made about ol' Plissken, including the contest used here to name him!

That sounds like the best night ever! I love it when we just get to sit at home and watch old movies and cuddle with the cats and drink wine. Seems like we don't get to do that too often...alas.

Jenn-- Sounds like you'd make a great neighbor! We'd have you over for old movies and new wine, and our cats would likely want you to pet them.

But I'll name our preserved tarantula in a glass box after YOU!