Some of my best friends are monsters, and I was anxious that the Famous Monsters of Filmland convention this past weekend would be of a high enough caliber for them to want to attend this inaugural gathering in Indianapolis named in their honor.

I had nothing to worry about, as I realized as soon as I got to the hotel: 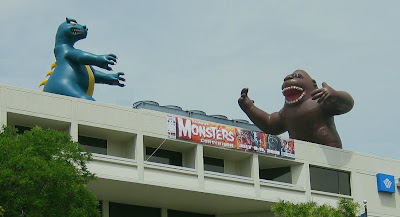 Godzilla (or maybe it's Gigantis?) and King Kong are very famous monsters, and very BIG celebrities in filmland! (Hey-- G-fest, the Godzilla convention, was taking place the same weekend near Chicago! And with it and a Twilight con happening at the same days in Indy, I was surprised at how well-attended the FMOF event was.)

There was some real suckage at this show, though-- because vampires were there:

This vampirette was the first monster I saw hanging around. (She was in bat form at the time.) She didn't glitter in the daylight, so I knew why she was here-- she wanted to see REAL vampires! And though I wished she would have sucked my neck, the convention certainly didn't suck. Jane and I have been to many cons and this was one of our top con experiences.

Another famous figure of folklore that attended was also a fanger-- Santa Claus! 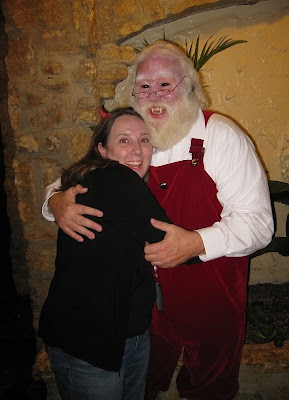 Who knew Kris Kringle was a blood drinker? But there he was, aroused with blood lust! 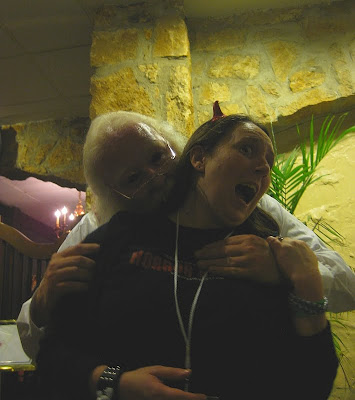 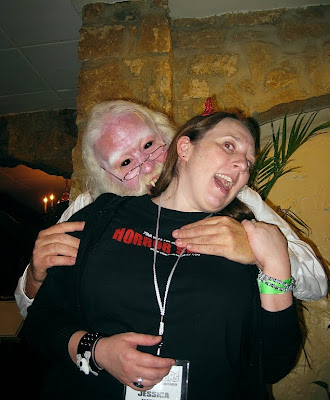 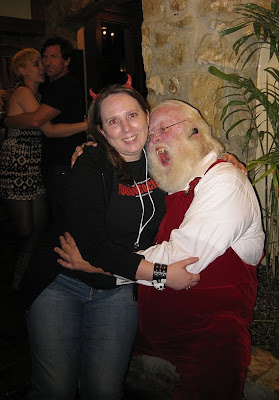 He gave this devilette the coolest present of all-- eternal life-in-death!

Sadly, the police later had to be called to the convention. Seems Santa Claus (or Claws, as the case may be) started an altercation when he altered the daughter of the mayor! The mayor of Indianapolis was there to officially kick off the con, and one simply doesn't mess with the city's main man when the police are present. I was happy no children were present to see this sad sight: 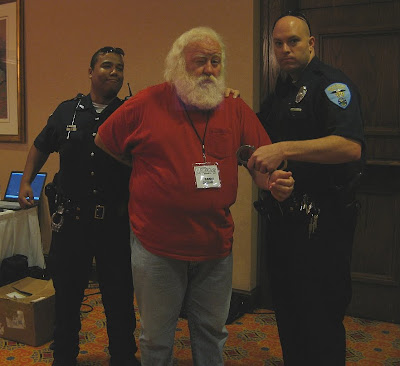 Thankfully, though St. Nick was nicked, his lead elf stayed behind to meet and greet fans and celebrities like Tony Todd: 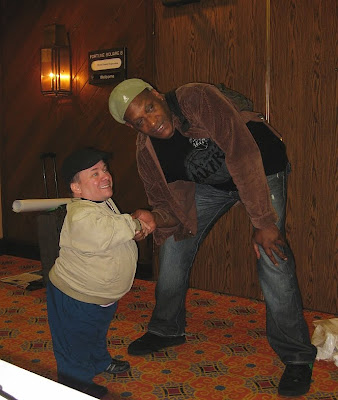 Okay, okay, okay-- I can hear you scoffing right through the monitor! So that MAY not have been Santa but instead actor Sal Lizard (The Box), posing for the photo with two cooperative policemen, and the elf MAY be actor and stunt man Ed Gale (The Polar Express, many others.)

Had there been any children present when Santa had the cuffs slapped on, I'm sure the sight of a circus clown would have calmed the little buggers--I mean darlings--down: 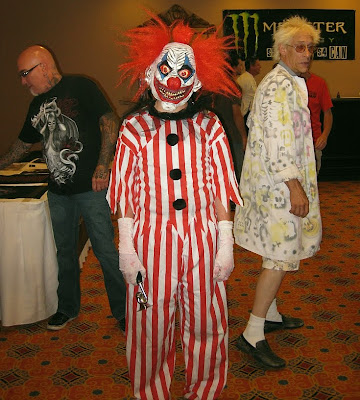 It calmed me down-- I fainted when I saw him!

In the next day or two or three, I'll share the REAL poop about the convention, describing what I saw and did, heard about, etc. And share LOTS more pics! Keep checkin' in!
Posted by Max the drunken severed head at 6:43:00 PM

Santa is merely an anagram for Satan!

Max, I'm looking forward to further posts on the convention, but PLEASE no photos of backed up toilets. Keep the poop out of this.

Wicked picture of Mr. Fanga Claws, sorry couldn't resist an Uncle Forrey-like pun. Neat pictures. I'd like to know more about the con too. I think I read that the guy that made the Aurora Monster models was there. I loved those as a kid.