Recently I was approached by TDSH reader Brenda Hineman about the idea of doing a guest post. She suggested a post on We All Scream For Ice Cream, a movie starring William Forsythe. She didn't enjoy Forsythe's performance as much as I did (he's great!), and I enjoyed the direction by Tom Holland and script by David J. Schow very much. But everyone's mileage will vary.

So this past weekend I chatted with William Forsythe at the FAMOUS MONSTERS CONVENTION! We talked about his best roles where he wasn't a bad guy. He was very gracious and warm. He even let me get a picture with him gratis: 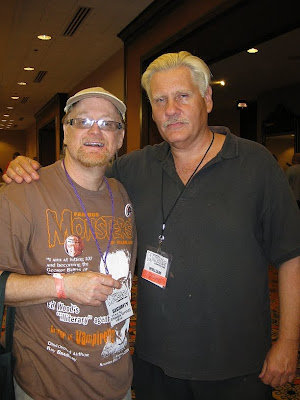 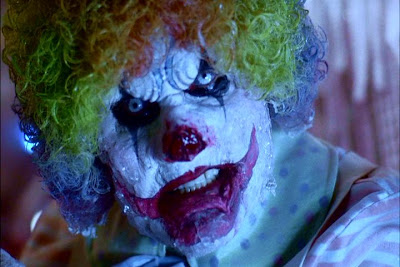 Stop into any Dairy Queen and you can get Buster bar for a couple of bucks, tops. When the kids in the Masters of Horror episode of We All Scream for Ice Cream get a Buster bar, however, they wind up paying a much higher price. But I'm getting a little ahead of myself.

The basic premise of We All Scream for Ice Cream is this. William Forsythe (The Devil's Rejects) plays a mentally challenged man who turns his disability into an advantage by dressing up as Buster the Clown and selling ice cream to kids from the Cheery Tyme truck. He does other tricks and is generally a highlight of most kids' day. Of course, some kids have to go and wreck everything. And in a prank gone wrong, a local pack of kids release the parking brake on Buster's truck when he's behind it and it crushes him.

Fast forward about 20 years when a couple members of the old gang have been killed in a most mysterious fashion, leaving behind nothing but their clothes and a big pile of goo. Of course, for some reason, nobody ever seems to talk about the goo at the crime.

At night, Buster returns in his Cheery Tyme truck to deliver ice cream to all the kids of the gang who killed him. And they come from their beds like zombies with quarters in hands to get Buster's voodoo doll ice cream cones. As soon as a kid takes a bite, their dad turns into a big pile of goo and clothes.

We All Scream for Ice Cream has all the makings of great horror: Evil clowns, zombie children, and voodoo ice cream! Sure, it's on the campy, cheesy, cliche side of horror, but most good horror has moments that make you say, "That is so corny. No one would ever do that!"

Sometimes those low-budget ones are the best.