SON OF DRACULA/TO CATCH A THIEF

Some of the posts I'll be making over the next few days will be about the Famous Monsters Convention that the Voodoo Queen and I just attended-- because we're jazzed about it, as both spectators and volunteers.

In a previous post, Famous Monsters Convene-- and SUCK!, I posted about vampires I saw at the con. I meant to include a picture of the Son of Dracula-- I met him there! 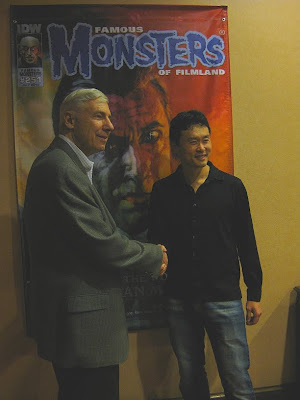 Above is Bela G. Lugosi, the sole son of screen star Bela "Dracula" Lugosi. In front of a banner featuring the vampiric visage of his dad (as rendered by the famous monster artist, Basil Gogos), he meets the new publisher of FM, Phillip Kim. Bela brought bottles of his new line of "Bela Lugosi Wines" with him for the winners of the first "Famous Monsters Lifetime Achievement Awards." (More on that in another post.) Jane and I talked with Bela and his wife in the con's green room about the wine. Jane asked if he would be marketing an Egri Bikaver ( or "Bull's Blood"--Hungary's most famous red wine), which was his father's favorite. Bela G.'s eyes got as big as saucers, and he asked us with a smile, "How did you know about that?" I said, "We're big fans of your father's--we know these things!" (Which sounded a bit egotistical, but I didn't mean it that way.)

Anyway--now here's where the "To Catch a Thief" part comes in. Sadly, someone stole that banner on the Saturday night/Sunday morning of the convention. But the doofus was caught on tape-- and if you know who the guy in this video is, please contact me or the FM site.

Sorry I missed your call today, I have been trying to wrap my Friday up so I can buckle down and write this weekend. Shoot me an email later if you can... BTW I think that is Tom Savini LoL, Go get em Head, LoL