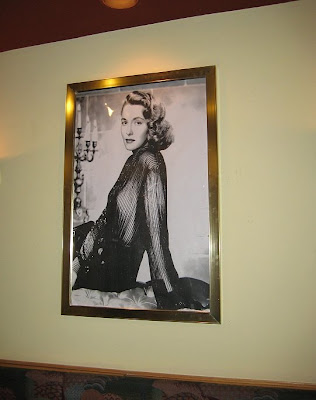 This blog hasn't been very active for the past month, for a number of reasons, including illness, blues in the night, extra work, and a-sundry causes for lamentation. Keeping the smile on this severed head has sometimes been a struggle of late, with the largest stress coming from knowing a family member is facing the need for hospice, and a friend is struggling with cancer.

So my thoughts have turned at times to the reaper with the scythe that harvests all souls. And on the same day that I read a moving, eloquent essay by Christopher Hitchens on his confronting his esophageal cancer, I read that actress Patricia Neal has died, and I'm just a bit sadder still.

The Voodoo Queen and I had the honor and pleasure of seeing Patricia Neal up close two years ago at a screening of the classic film The Day the Earth Stood Still. She spoke of her love of acting, of Gary Cooper, and of life itself, despite some famous, hard setbacks, such as the three strokes that hit her at age 39. She fought the effects from them fight with for years, never completely overcoming them. But she adapted, making a far better recovery than was thought possible and going on to distinguish herself with acclaimed performances in film and television.

Ms. Neal and Mr. Hitchens show life can be lived with dignity and even delight, despite real horror staring a person in the face. I'm buoyed by for their public examples of grace and determination

Read the TDSH post about Ms. Neal's appearance at the 2008 Annual 24 Hour Sci-Fi Marathon here.
Posted by Max the drunken severed head at 2:26:00 AM

Sorry to hear of her passing. :(
And I'm sorry to hear that you've been feeling down as well.
I hope that your spirits rise again soon.

Ooh, I like to see spirits rising. Thanks for the nice visual!