"The Greatest Ghost Story Ever Heard"

The final month of the year brings us into the Nativity-and-noel, solstice-and-Santa season. Traditionally a time to tell ghost stories, TDSH kicks off December with a guest article (in two parts) on the audio versions of the greatest and most spirit-ed ghost story of them all-- Charles Dickens' A Christmas Carol. I'm grateful to author Craig Wichman for sharing it here.
This is Part 1. Part 2 runs tomorrow.
____________________

THE GREATEST GHOST STORY EVER HEARD

Several of the most famous horror actors of the golden age of films performed Dickens' classic tale not only at the movies and on stage, but also in another theater almost forgotten today -- radio's "Theater of Imagination." 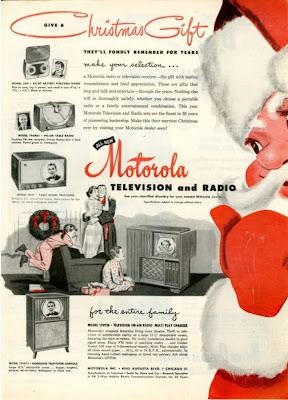 1949 ad for radio/tv combo.
On a brisk Christmas Eve in the early 1970s in the Midwestern countryside, a young boy and his little sister sneak away from the extended family festivities to huddle in front of the hulking “Entertainment Center” radio upstairs. The strains of Tchaikovsky’s “Theme from Piano Concerto No.1 (Tonight We Love)” begin and soon the two are whisked away to Queen Victoria’s London (and somehow, to Franklin Roosevelt’s Depression-era America at the same time.)
“A solemn Phantom, shrouded in black, draped and hooded, came towards him slowly and silently...like a mist along the ground...”
A local AM station was re-broadcasting the classic 1939 Campbell Playhouse “A Christmas Carol” with Lionel Barrymore (Drew's great-uncle), and it was as magical that night as when first heard on the eve of the Second World War. It would be one of the main reasons why the present writer – only 4 years old when such programs were killed by the networks in 1962 – became a life-long lover of radio drama.

Of course, fantasy and horror were no strangers to Golden Age Radio. Starting in the early days with shows like The Witch’s Tale, programs including Wyllis (Son of Frankenstein) Cooper’s Lights Out, Inner Sanctum and Suspense presented works by Lovecraft, Stevenson, Poe and Wells, performed by the likes of Boris Karloff, Bela Lugosi, and Peter Lorre. 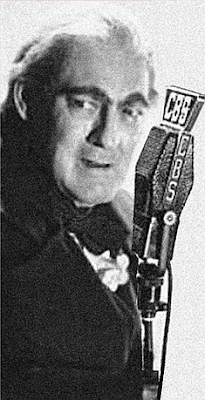 Photo of Barrymore as Scrooge from a 1940 Winnipeg Free Press article. Image source here.
This specific radio production by Orson Welles and the Mercury Theatre of THE iconic Christmas story, is a deserved classic.

“This must be distinctly understood, or nothing
wonderful can come of the story I am going to relate...”

In the summer of 1843, 31-year-old Charles Dickens was already a famous writer, but his most recent work was not generating money as quickly as he had hoped;. and with an extended family that looked to him for support, the fears about money that had haunted him since the sometime poverty of his childhood returned. While taking his daily walks among the common people on the “black streets of London,” he decided to present them with a holiday treat that would also quickly raise cash for himself. With time short, he would build on a preexisting foundation: a portion of his novel The Pickwick Papers which just happens to be the story of a hard-hearted man who is shown the error of his ways by otherworldly creatures.

The first edition of 6,000 sold out by Christmas Eve. 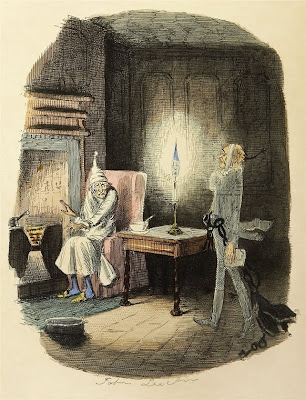 "Marley's Ghost," handcolored illustration by John Leech from the 1843 First Edition of A Christmas Carol
An immediate sensation, five unauthorized productions had been mounted on stage in London by February 5. By the following Christmas, the same pattern of success had crossed the Atlantic to New York City. As years passed, The Carol spread; pirated editions were printed; it was musicalized; and as early as 1901, made into a British silent film by W.R. Booth. 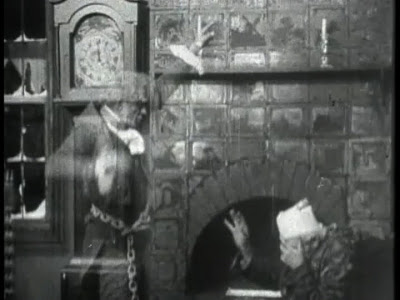 An early film version of Dicken's ghostly Christmas tale.
As an amateur actor himself, when later he again found himself short of cash, Dickens trod the boards with public readings of his own works. A special adaptation of A Christmas Carol was always one of the biggest crowd-pleasers.

Indeed, when another medium was born, radio, Carol would become a holiday staple. Even now, when radio drama is a shade of what it was in its heyday, adaptations of The Carol are aired along with evergreen Yule musical classics like Handel’s “Messiah” and Irving Berlin’s ”White Christmas.”

In the early days of civilian radio, entertainment consisted largely of musical acts, speeches or monologues by single performers and occasional short sketches. But early on, performers realized that longer, fully-cast dramatic pieces could be successful in the medium. Dickens’ masterpiece was an ideal choice for them: a great story, already beloved by the public. Being in the public domain it was also fee-free!

The first documented presentation of The Carol seems to have been on December 22nd, 1922, by pioneer station WEAF in New York, and likely the simpler type of broadcast mentioned earlier – a 30-minute reading by Charles Mills, with music. Presentations over the following two years on stations WRC, WGY, WOAW, WOR, and the U.S.’s first commercially licensed station, Pittsburgh’s KDKA, seem to have been similar in scope, perhaps using Dickens’ own trimmed-for-public-reading text.

On Christmas Eve of 1924, Chicago’s WMAQ Players performed The Carol in the first known instance of a multi-cast dramatization for broadcast. And in 1926, the mini-network of WFBL, WGY and WMAK broadcast a production by the Boar's Head Dramatic Society of Syracuse, N.Y.

Another step forward was taken on Christmas Eve of 1928, when WOR, the first station to carry programming from William Paley’s fledgling Columbia Broadcasting System, aired with sister station WMAL a TWO-HOUR dramatization of the story with music, and the 120 minutes granted Dickens’ rich tale real room to express itself. "The CBS" (as some called it then) Carol-ed again regularly over the following years by way of NYC station WABC.

In 1931, NBC postponed their weekly visit to Baker Street, as Richard Gordon put aside his usual radio guise of Sherlock Holmes to become Ebenezer Scrooge, and Leigh Lovel’s Dr. Watson told a tale not from Doyle but Dickens, as adapted by writer/co-creator Edith Meiser. (She, like many others, would revisit the story in later years.)

Then, in 1934, CBS hired the man who was thought of as the definitive Ebenezer Scrooge throughout Depression- and World War II-era America.

“It was always said of him, that he knew how to keep Christmas well, if any man alive possessed the knowledge.”

On the afternoon of Christmas Day 1934, CBS presented a variety special featuring such talents as Victor Young’s orchestra, opera star Madame Schumann-Heink and comedienne Bea Lillie. The program originated simultaneously via phone lines from studios in New York, Chicago and Los Angeles – and from L.A., Lionel Barrymore, stage and movie star (The Devil Doll, Mark of the Vampire) gave his very first performance as Ebenezer Scrooge. 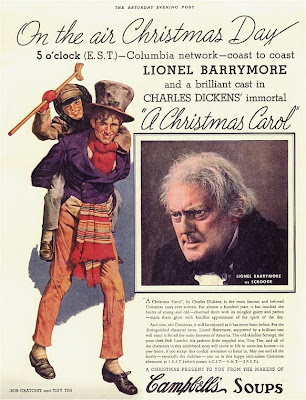 Barrymore was a hit, and CBS signed him to a five-year contract in the part. (But it was only the beginning of a run in the role that grew to cover nearly two decades!) Campbell's Soup sponsored Barrymore and company annually. Unfortunately, twice he had to step away from the microphone as Scrooge.

When Christmas Eve rolled around in 1936, Lionel's ailing wife Irene Fenwick passed away, and his brother John went on mic for him. This program does not appear to exist in recorded form. (It's a pity--John idolized his older brother, and in his 1937 Streamlined Shakespeare broadcast of “Twelfth Night” imitated him lovingly and well; he likely did that in this case, too.) 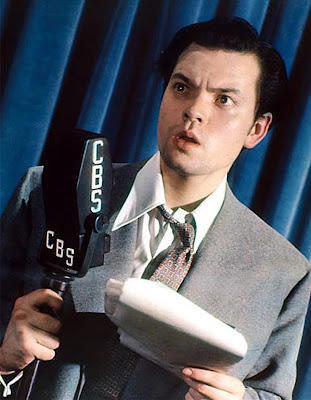 In 1938, Orson Welles and his program Mercury Theatre on the Air panicked much of America on Halloween night with his faux news-bulletin version of “War Of The Worlds.” Seeing a public relations bonanza, Campbell's Soup picked up that series as well. So for Christmas of that year, they planned to offer two gifts in one package: Campbell Playhouse (the renamed Mercury Theatre on the Air), with Orson Welles as producer, would present Lionel Barrymore in “A Christmas Carol.”

But the real-life off-stage plot, like Campbell's soups, thickened over time.

Tomorrow: Success becomes a double-edged sword for Barrymore's radio role-playing.
Join Craig on the RADIO ONCE MORE webcast Friday, December 3rd at 9pm, to discuss the Carol's history, and to hear his own and Barrymore's productions of the story, as well as excerpts from several others.
Posted by Max the drunken severed head at 1:18:00 AM

Thanks for welcoming my little labor of love into your home, Max.

THAT's "The Spirit of Christmas!"
-Craig