'Twas The Night of the Living Dead

The Drunken Severed Head has lately been getting some wonderful gifts from friends. Besides the lovely article on audio versions of Dickens' ghostly A Christmas Carol from NYC actor Craig Wichman, friend and television writer Richard J. Shellbach shared his walking dead version of "The Night Before Christmas" with ye olde severed noggin. I proudly post it below.

A note on the illustrations: All were found on the 'net, and several were tweaked by me to better fit this poem. Links are provided at the bottom to the source pages for each image. All rights to the images belong to their creators and will be removed upon request by the rights holder. Some images were created by professional artists; please visit their sites by clicking on the links provided.

(With apologies to Clement Clarke Moore)
'Twas the night before Christmas as I lay in bed
Not a creature was stirring…except for the dead. 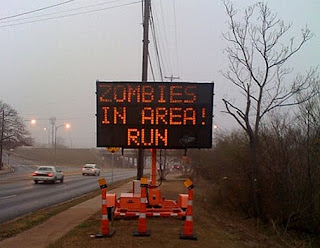 Some old boards were nailed over windows, with care,
In hopes that no flesh-eaters could get through there. 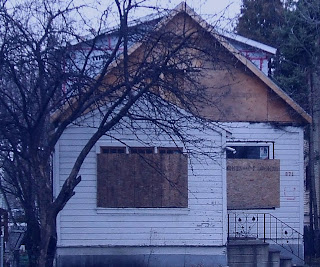 My wife in her nightshirt and me in my britches
Had just settled in, with our thirty-aught sixes.

The children were terrified under their beds;
They just kept repeating, "Dad, aim for their heads."

'Cause out on the lawn we had been hearing moaning,
The screams of the innocent and occasional groaning.

So away to the window I flew like a flash,
Tore off an old board and threw up the sash.

The moon on the breast of the new-fallen snow
Gave the luster of mid-day to zombies below.
Then what through my Remington scope should appear
But a rotted old sleigh and eight undead reindeer. 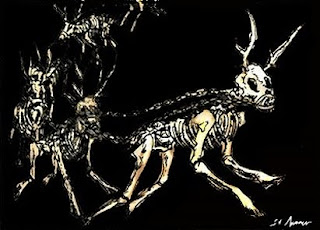 With a red-suited driver whom I, instantly,
Determined was Santa… or, he used to be. 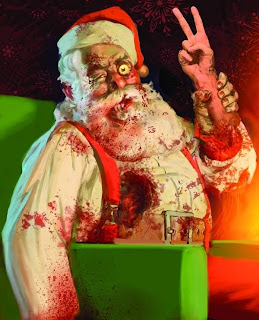 As the reindeer flew towards me I raised up my gun
And squeezing the trigger, I shot at each one-- 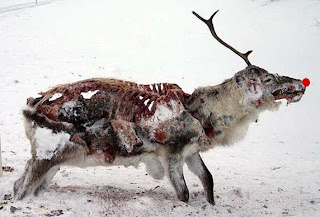 But more dead folks appeared as the others lay slain.
They gathered together and forward they came!

Then up to the front porch to start the attack,
With dead zombie Santa at the head of the pack. 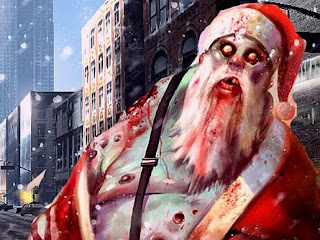 And mere minutes later, that bastard Kris Kringle
Climbed up on the lattice and clawed each roof shingle.

As I quickly reloaded and went whipping around,
Down the chimney dead Santa Claus came with a bound. 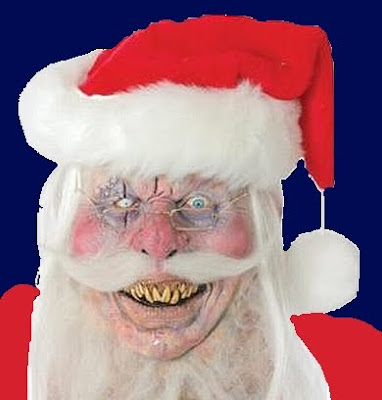 He was dressed all in red, from his head to his feet,
And his clothes were all bloody from victims he'd eat.

The bag that had carried toys and candy canes,
Instead was all filled up with human remains. 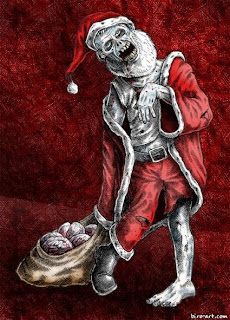 His eyes - like white marbles! His throat was just hissing!
His cheeks were all hollow; his nose, it was missing!

The beard on his chin was all matted with blood,
And his left ear fell off - hit the floor with a thud.

He had pink flesh hanging from between his teeth.
And the flies all encircled his head like a wreath.

He was fetid and bloated, a rancid old lout.
And I screamed when I saw him, and almost passed out.

A wink of his eye and a twist of his head,
Gave me to know I'd soon join the undead.

He clawed at my stomach, then, went straight to his work.
He grabbed my intestines, then gave them a jerk.

And after he fed, he threw open the door
And let in some zombies - 'bout 60 or more. 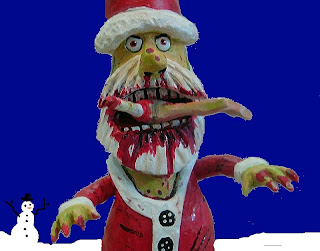 As they fed on my entrails and drained me of life,
I saw them devour my kids and my wife.

And the last thing I heard were these words Santa said;
"Merry Christmas to all… in the land of the dead!" 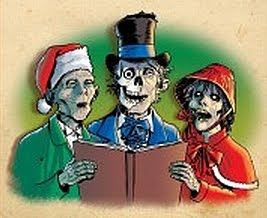 Twas' The Night of The Living Dead is pure holiday joy for us monster lovers! Thanks so much for sharing this delightful story that I will read aloud to my adult children until they beg me to stop!

Thanks for the kind words, Max - and for the spooky ones, Rich!