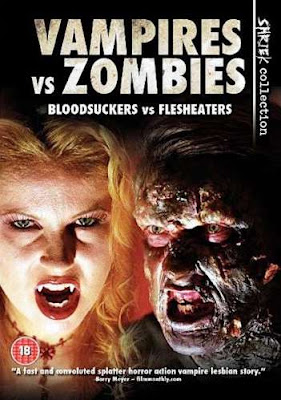 I've just had a gauntlet slapped across my face, my friends.

You see, this blogger, Melissa, of Edge of Forever, wrote to tell me that this Psychology Today article proves zombies are merely "posers" in monster pop culture. She feels zombies are mere diversions from the enduring symbolic power of vampires-- and adds these links to further her argument.

Lotta gas and shiny ideas with no weight, says me.

Yeah, okay, vampires are cool monsters, sure. They deserve the same respect that all senior citizens deserve. But c'mon. ZOMBIES are today. Zombies look you in the eye and they are in your face. Vampires, when they aren't moping, are on your neck. (Kinda like my boss at work.)

Melissa has posted that zombies are "media whores." (That's it, she's crossed a line!) She has also challenged me (representing Pittsburgh, the zombie capital of the world) to a battle of wits! (Why would she pick on an unarmed man?)

Hah. I'll show her! She doesn't fight with just me, she fights with all my zombie-loving readers. (My friends who are vampire chauvinists please sit on the sidelines.) So let's dump out the big bag o' snark hammers and administer some lumps.

Off the top of my severed head I can name half-o'-dozen reasons why zombies are better...

Six Reasons Why Zombies Are Superior to Vampires 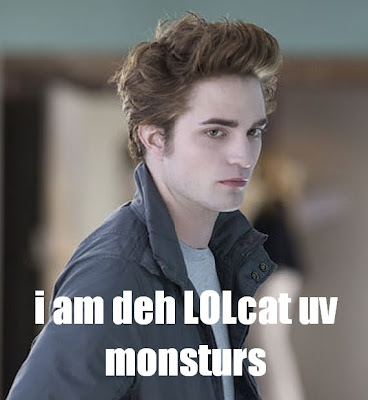 1. Zombies EAT. Vampires suck.
Really, can a vampire defeat a zombie when all it subsists on is a liquid diet?

2. Zombies, being mindless or nearly so, are immune to a vampire's hypnotic powers.

Let's see Dracula wiggle his fingers and enthrall a zombie! Not gonna happen.

3. Zombies can attack in the daytime.

A vampire in his coffin during the daylight hours would be just one more source of brain food for a zombie. Zombies don't even need sunblock.

4. Zombies aren't fussy about their appearance.

Vampires worry about having clothes that will give them a look of dapper decadence, which is SO 19th century.)

6. Zombies accept themselves as they are.

Okay, readers, this is where YOU come in. (You got my back, right? Back o' my head, anyway...) You can add to these six reasons in "comments" until we overwhelm and CRUSH this silly "oooh, vampires are just the bestest" mindset! Make Melissa surrender! 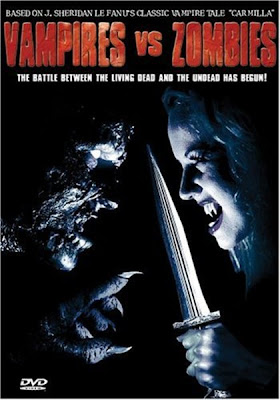 7.Zombies don't have hormones that cause them to sigh or pout or try to reproduce with the pretty girl,zombies will eat anybody even uglies.

- Zombies eat what's bothering them.
- Zombies are persistent, even if they're missing limbs. Nothing gets in the way of that tasty brain.
- Vampires go into a tizzy if they break a nail, let alone a fang.

wait this is a real movie... i thought you were kidding.
zoinks!

I do agree with your assessments, Max. Zombies also are equal opportunity employers. Vampires are so picky! I've seen that movie too. If you want a real vampire vs zombie war, read the Nocent series. The first book is being put out on thenocent.blogspot.com.

First they're at war with werewolves, now zombies. Can't vampires get along with anybody?

Zombies are us. Anyone and everyone can become a zombie.
Democracy in action.

Vampires are some effete foreigner or emo wimp.
Smacks of elitism.

Zombies are honest. They just want to eat you.

Vampires are dishonest. There is almost always a seduction scene. But it ain’t love, Bella. Despite the sparkling, they only want blood.

Face the non romantic facts: Vampires are dead. That means no heartbeat. No pulse. No blood pressure. Vasocongestion will not happen. The only wood he will get is a stake through the heart.

Zombies are completely unrelenting. They can't be swayed and they can't be stopped, other than a bullet to the head. Once someone becomes a zombie (even if they're your mom or your best friend), there is NO mercy.

Melissa, if you're reading this--see how fast the comments come in in favor of ZOMBIES!? Behold the wisdom of the people!

But...why are zombies so grouchy? I think I know:
http://writersarevampires.blogspot.com/2011/01/vampires-vs-zombies-part-4.html

Zombies will never have to take high school trig for 500 years.

Zombies can hit the mall any time of day. Vampires have to wait for the Midnight Madness Sale at Monroeville Mall.

Oh, and to Vampires have a choir like this?

just click in their little heads to make 'em sing.