A friend and a frenemy

The friend is Kiki La Mer, of the blog A Rockabilly View, who recently gave me an award. She feels I'm a "versatile blogger." Ms. La Meris pretty versatile herself, having re-invented herself a few times. (She used to be a "chav," she says--will someone tell me what that is?) She is the only person I know who wants to be buried in a giant lipstick, which is a pretty cool way to take one's dirt nap. Thanks much, Kiki (a/k/a Coral)! Kiki happens to be the name of my wife's cat, although sometimes I suspect it to be my wife's familiar.

As part of this compliment from ARV, I'm supposed to share seven things about myself. Soooo... 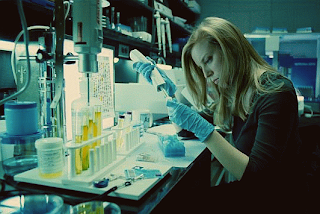 Before I became a severed head, I once created life in a laboratory. Dr. Elsa Kast and I had been drinking, and her biological clock was ticking, and she wanted a break from her work, and, um...

I am allergic to stoats and weasels but not ferrets.

I once spilled Thousand Island all over myself, but a beautiful waitress came over and undressed me.

I want to change the name of air hockey to "balloon juice puckwhack."

I once met Robert De Niro before he was famous.

I have trouble thinking up seven things to share.

But I can think of eight things, like the fact that at least one thing above is true!

And now for the "frenemy." That is my blooging enemy (no , that's not a typo--she's a big ol' blooger!) Melissa Castro of the Edge of Forever blog, a vampire maniac who rambled on about something related to Pittsburgh's Super Bowl loss and zombies I could quite make out. (Either I was inebriated or she was-- I think it was her--if only I could remember!) She showed just how much pop-power zombies have right now by posting a Glee zombie dance in her post! She makes our "zombies versus vampires" blog wrestling so easy for me!

She also sent me this picture of something she says I need to use: 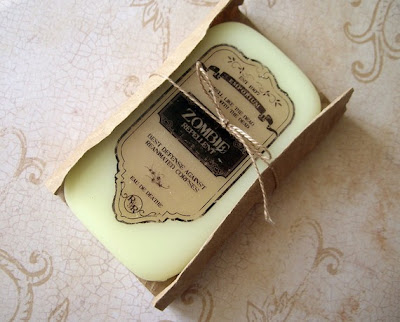 Guess she thinks I don't bathe, or can't handle myself in a zombie attack, or do both simultaneously. (And maybe I can't--but still...)

By the way, the soap above can be found here.

Well, Mel, I think you should use this--

I mean, you're no Buffy and will need all the help you can get. I think they sell these at Olive Garden, your favorite restaurant. Here are some other items to buy and recommend to your bloodsucker-enabling friends: 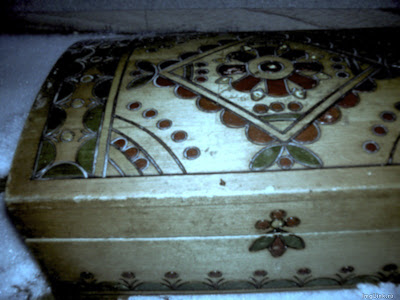 It's a box selling for $187 that contains an alleged "Vampire Immortal Transformation Spell" inside, which using will allegedly "make you stronger, faster, quicker and powerful." (A membership to a gym will do the same, and can be had for less, but I guess many of today's vampire fans are Barnum-bait.)

Hey, Mel, buy the box and then you'll have a place to store this hat (you're always talking out of one): 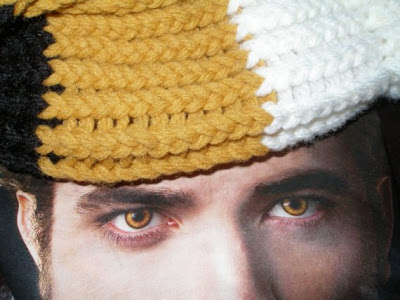 It's a hand-made cap with colors whose "inspiration" comes from "Edward Cullen's eyes." OOOOOOOH!

Yeah, I know--you're that rare modern vampire fan who doesn't like Twilight. So maybe these shoes are more your style: 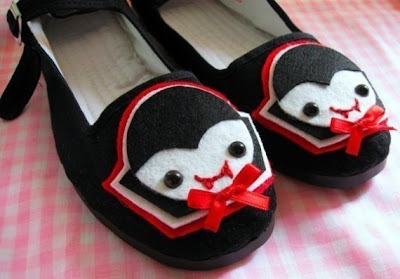 Image found here.
How spookiwy pwecious dey are! I could just noms dem.

Or you could store this in it: 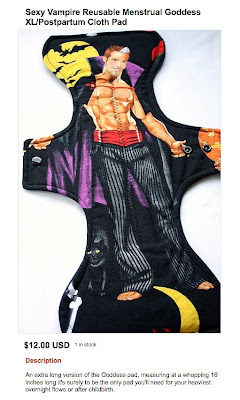 So many vampire fans today seem to yearn for a better domestic partner. Maybe if they had only met and married a nice, hot zombie doctor:

My thanks to the lovely and kooky Kiki, who is really a top, and to the crazy-but-dedicated Melissa, whom I use as a mop. Now I must stop.
Posted by Max the drunken severed head at 1:42:00 PM

BWHAHAHA! I love this post! And I love Kiki too!