Undead onslaught not slowing
"Been wondering if the pop infatuation with rom-zoms (Romero-style zombies) is on the skids in the United States. I mean, wasn’t their fifteen minutes up some time ago?

"Happily, I have to say I don’t think so. “Zombie walks” and other zombie events are increasingly popular. The Walking Dead comics have had enormous sales, and a second season of the show based on them begins in October. The zombie apocalypse of Resident Evil keeps gamers busy. Undead flesh-eaters just keep a-comin’." 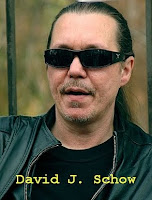