I've been lucky in meeting many obsessive creeps talented people as I go to weird events, horror film cons, or blather on participate in horror film forums. These weirdos friends get noticed, and often wind up working on horror magazines or in film. Horror magazines are undergoing something of a renaissance even as traditional outlets like bookstores become more scarce.Here's three examples of some of my friends' success in working in print:


Richard Shellbach and
UNDYING MONSTERS
Rich is a really old pal good friend who has long been a professional writer, and this past year has been writing for Famous Monsters of Filmland magazine. Now he will also be a featured columnist for a new magazine I'm dying to get my hands on--Undying Monsters. 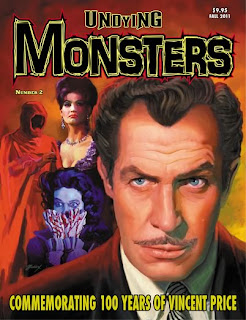 This is issue two, which comes out the first week of August, and the cover art is by my pal Mark Maddox. 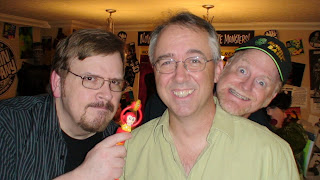 From the UM press release:

"Rich has written for Nickelodeon's "Are You Afraid Of The Dark?", NBC's "SpaceCats" and "ALF-Tales," Showtime's "Chris Cross" and was the season four Story Editor on the live action ALF series on NBC. He also wrote all three seasons of the syndicated series, "The Kids Café" and worked on children's holiday specials for Showtime."  (Above right: Author Tim Lucas, artist Mark Maddox, and me self at the 2011 Wonderfest con.)

Here's Rich's banner. (Rich has never been a bouncer, or worked security for a Stones concert, so I have no idea where this photo comes from.) I'm sure he'll be a great asset to UNDYING MONSTERS, just as he is for FM. 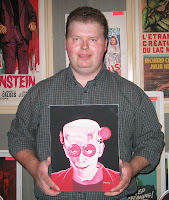 Dwayne is an artist I've admired and championed for some years, as you can see from this blog post  (which includes an interview), and from this one. I'm proud to say that the new Shadowland magazine discovered him through this blog, and have put his portrait of Lon Chaney from The Phantom of the Opera (a painting that first appeared publicly here at TDSH) on their premiere issue! Dwayne is also interviewed in this ish.
You can buy Shadowland at their web site. This new monster rag looks very promising, and has me more excited than Happy Hour at the morgue. 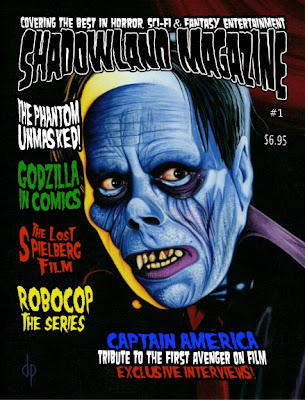 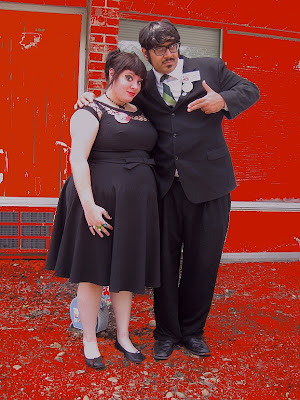 Dixie and Lobo publish and edit the new mag Horror Hosts and Creature Features. As a former horror host for commercial TV station KXTV in Sacramento, CA, (the program Cinema Insomnia) Mr. Lobo has a keen appreciation for the subtle virtues and brash weirdness of cult movies. And he and Dixie are very interesting people to spend time with at horror conventions. I speak from experience! 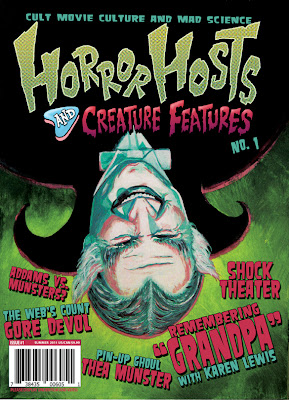 The first issue is a little thin, but has a great article remembering the work and life of actor Al Lewis of The Munsters, some very nice pin-ups of retro-Goth model Thea Munster, original cartoon art by the noted illustrator and cartoonist Danny Hellman, and an interview with Count Gore De Vol, among other items. I'm glad to have my copy of issue one, and look forward to future giant gila monster-size issues. For sale here.
Posted by Max the drunken severed head at 3:35:00 AM

A big shout out to Max for sending the publisher of Shadowland Magazine my way...you are a true fiend! Err...friend!
Wait til you see next issue's cover!

First you plug a new Must Have Book.
Now you are shilling for three new monster mags!
You're really making my life difficult.

Now I've got to find a couple more excuses to give the dread wife "She Who Must Be obeyed" (cue scary music)so I can manage a raise in my allowance.