A Joker Gets Trumped, or...

...My Connection to a Comedic Crime! 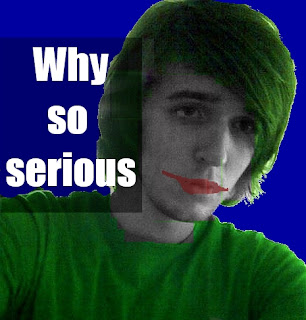 This young guy has made the news internationally, and I know him! He was arrested for trying to (allegedly) commit one of the dumbest crimes this year, and (allegedly) offering the lamest lie EVER to the detective who arrested him. His name's Micah Calamosca, and I worked with him for a couple of years, until a few months ago. He also assembled the computer I blog from!
The crime he (allegedly) tried to commit was carjacking a car from an undercover police officer. He then (allegedly) tried to get out of trouble by telling the police officer that he meant no harm--he was only doing it as part of the filming of The Dark Knight Rises, which is shooting here in Pittsburgh. You can read all about it at online news sources as far as England and Australia. An ABC news item on this can be found HERE.
A soft-spoken amiable kid, I never expected this from Micah. His friends are all very surprised. We wish him a better eventual future than his immediate one. Crime doesn't pay! (Hope tough guys in prison aren't soon singing him "For He's a Jolly Good Felon!")
A couple of comments I found in response to online news reports:
"Letters in his name rearrange to Ciao Cash, Calm Ma."
"That's what he gets for 'Robin' the officer!"
And apparently he too has a sense of humor about this turn of events, as I see he changed his "work" designation on his Facebook page to "Inmate at Arkham Asylum"!
Hoo boy!
Posted by Max the drunken severed head at 5:50:00 PM

oh god what an idiot!! lol.

That is too bad. Hopefully they don't throw the book at him. Can he plead not guilty by reason of Lameness? Sounds like he needs help if this is so unexpected and out of character.