Recommending three more blogs that will perk up your All Hallow's Eve season. The first is a top music blog that I've always liked. It that has joined the blogosphere's celebration of Hallowe'en; it's called Music You (Possibly) Won't Hear Anyplace Else, and it features some of the rarest and oldest spooky music to be found anywhere this Samhain season.

Next is Musty TV, and this blogger has also joined the Hallowe'en countdown blog-a-thon. Each day its proprietor who will posting his comments about a "good horror, sci-fi, or thrill film (or Halloween special!)" that airs on TV in October.

Speaking of TV, I noticed that Neato Ghoulville has a video player at the bottom of the blog called "Ghoul TV". It has 42 different Hallowe'en video selections. You could spend too much time enthralled there, but man, what fun!

Last is a blog that brings back memories of the monster makeup mania of my youth: Max And Courtney Make Monsters. Here's a bit of their blog's introduction: "In 1965, under the Famous Monsters of Filmland imprimatur, movie make-up guy Dick Smith published a little booklet called Do-It-Yourself Monster Make-Up, which he later republished, in book form. In it, he explained, step-by-step, how to create movie monsters and special effects of increasing sophistication, but all geared toward the crafty young boy or girl who might later go on to make Super-8 movies starring these homemade monsters.

"It is our plan to go through this book and create every single monster and make-up effect that Smith describes, although perhaps not in the order he indicates. We shall document this, and then we shall make our own little movies. We are Max Sparber, a playwright, arts critic, and sometimes actor, and Courtney Mault, an aspiring horror makeup artists with at least one film credit -- the independently shot Risen, in which Max appeared as a chinless zombie.

"Note: We encourage you to buy Dick Smith's book if you plan to attempt these experiments yourself. We will only be describing how we do it in themost general of terms -- for the more complex details of applying makeup, Smith's book is chock-full of excellent advice."

Their recreations of the makeups are fun to see. They also post a link to the Amazon listing to Dick Smith's makeup book, which is a classic all Hallowe'en lovers oughtta have on a shelf.

Notice that ol' severed drunken me has added a Hallowe'en-themed poll to the blog. Please vote! Or send in suggestions for poll questions for this month!

Also added is a list of movies the Voodoo Queen and I our watching this month, and my rating of each flick. Speaking of my dear bride, she stored these two Hallowe'en photos in our computer last year; I found 'em and share them herewith. 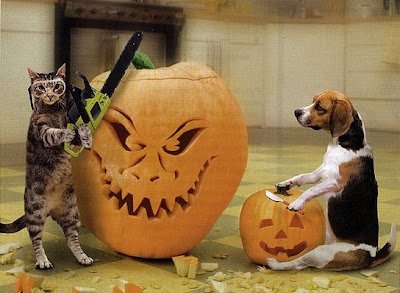 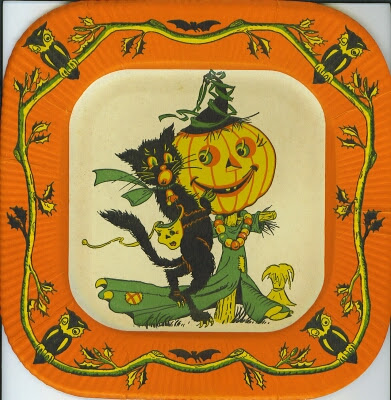 To end this post, here are some monster jokes:

Found on the monster's bookshelf:

Dare You To Touch It, by Harry I. Ball

My Life As A Private Eye, by Sy Klopps

What Happened To The Cannibal's Friend?, by I. A. Timm