Part of the fun of my birthday was seeing the nice wishes posted at the Universal Monster Army and at the Classic Horror Film Board. There were so many that it warmed the very cockles of my heart. In fact, they were so warmed that I got heartburn of the cockles!

I want to post here a piece of art done by friend and artist Roger Koch, and a joke shared by my cousin-in-law, Chris Herzog. First, a very nice sketch of the title creep from the film The Thing That Couldn't Die: 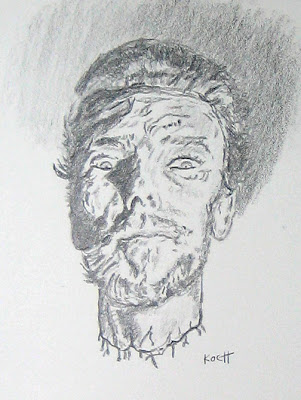 Of course, I loved seeing this picture of my late great uncle Hedly. Poor guy. He found it difficult to get work in Hollywood, but TTTCD gave him a starring role.

Now, the joke--it's a classic:

An expectant father waited nervously for word of his child's arrival. After an long wait, the doctor entered the waiting room.

"I'm afraid I have some bad news for you. Your child is alive. But he was born with only a head. No limbs, no lower extremities of any kind. Just a head."

The father, of course, was devastated. Yet he and his wife loved their child and vowed to bring him up as normally as possible.

Flash forward to the child's 12th birthday: The father gets a call from a European specialist, who says that a new technology had been developed that would actually enable his son to grow a new, healthy body from his own cells! Although new, the technique had been thoroughly tested and would definitely work. Further, the elite medical team behind it had agreed to do the work for free! Elated, the father rushed to tell his family.

"Son! Son!" he called, as soon as he was through the door, "I have a wonderful surprise for you!"

From the next room where his birthday party was taking place, his son replied,

"IT BETTER NOT BE ANOTHER DAMN HAT!"
Posted by Max the drunken severed head at 1:41:00 AM