Not nameless for much longer!

Well, TDSH readers, here in the pics below is the mono-visioned monster itself, our new pet snake, soon to be named by one of our loyal blog-readin' friends. (No more further suggestions for names will be taken.)

You'll notice a 21 name poll at the top right on this page, and you'll have until midnight Saturday to vote for a name. (I'm allowing multiple choices just to make things interesting.) The top vote-getters will be used for the final selection as made by a celebrity judge, myself, and Paula Abdul. (Hey, she needed a gig.) 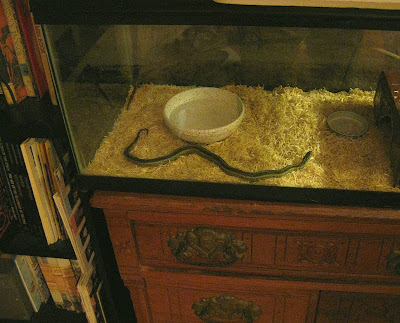 Here it is, ready for its closeup, Mr. DeMille: 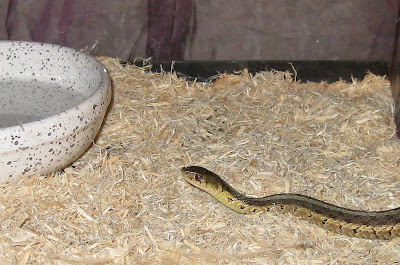 The other day, the lid on top was not secured completely, and Jane came downstairs for her morning coffee and newspaper-reading ritual. (I was passed out upstairs.) She happened to glance at the TV, when up from behind it, like a slow periscope, popped the snake! (Swear-to-god-truth, so help me.) But my wife is a brave woman (hey, she married me, didn't she?), and she just laughed, put on a glove and grabbed that sucker, and put him/her back where it belonged.

I can always count on her to do the right thing. But sometimes I screw up. For example, I bought some dirt-cheap snake food from an old pet store in Dauphin County, here in Pennsylvania, near Harrisburg. They had some 30-year-old stock that they practically gave me. I thought I was lucky to save so much--until I saw my snake in the dark, after feeding it the stuff: 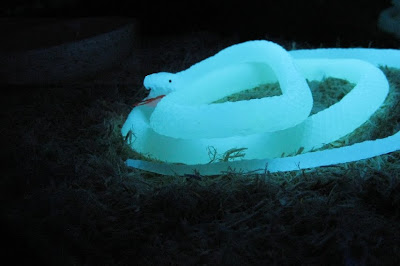 Now I know why it was so cheap--the shop was located near the site of this famous event.

Anyway, get your votes in! For those contest entrants who submitted multiple names, I chose only one of the suggested submissions. (I had to admit, it was hard to leave off the horrible but in deliciously bad-taste suggestion of "Prince Randian," as well as the euphonious "Freddy 'Boom Boom' Washington.") I like ALL the suggested names in the poll, as they range from the cute, the ironic, and the risque, to the openly insulting. (Not insulting to me, thank goodness.) I'm grateful to everyone who suggested a name.

I don't want any prizes sent to me. What I want is for you to memorialize me somehow in the undoubtedly awesome Halloween display in your front yard.

Wow, really, your snake glows in the dark?!? Wait, that did not sound good....ah, sorry, but seriously, that is strange...this is not sounding any better....I should go :D

Cool pictures....can hardly wait to find out the name!

As a fellow snake owner, I wanted to post earlier, but life and computer problems "happen".

My ball python (quite the escape artist himself) is named Snicker and my California King is Rex.

On my way to vote for your new reptile.

Hey, wait a minute... Just one more... REPTILICUS! How could we miss that one??

But Ubermilf-- what is a fitting tribute to some so uber?

Frog Queen-- Thanks for the compliments, hard as it was to get them out! I know it's easy for frogs to get tongue-tied.

Anon--Who are you? Thanks for posting and may your snakes be healthy and happy. I recommend regular doses of OJ and vodka for them.

Pierre--for once you're not eating here!

I am ashamed I never thought of Denmark's most famous puppet!

Sure, now you come up with the obvious (though nobody thought of it, till now) winner!