Wonderfest and the Rondos, Pt. 5

Ever seen any at a restaurant? I don't mean waiters who are slow, have a bad attitude and aren't focused on what they're doing. There's too many of them. No, I mean the rare kind- REAL, brain-eating zombie waiters! Well at the 2010 Wonderfest Banquet, they were on hand! (And on foot, and on leg, and on head, and any other part they could sink their teeth into!) 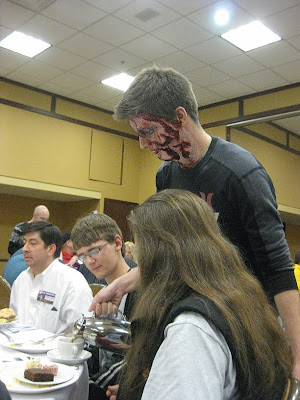 They WERE kind enough to feed folks before trying to feed ON them. 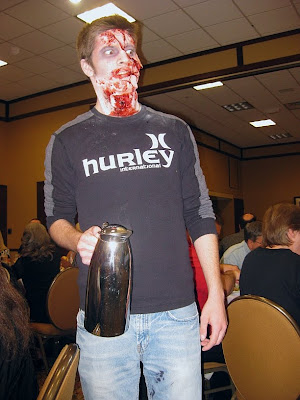 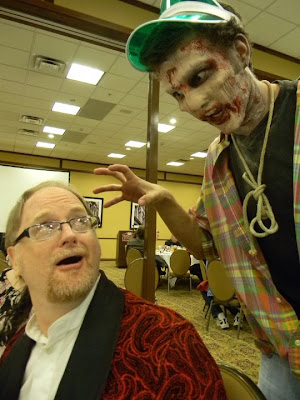 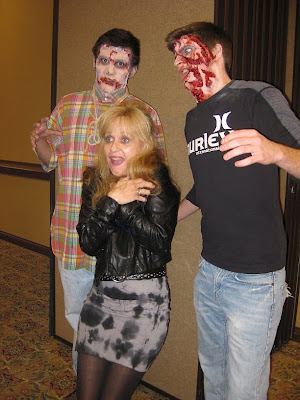 I'm happy to report that Ms. Quigley survived intact. Like a beautiful cake in a baking contest, she was just too pretty to consume! Me, however-- well, I'm just lucky there's any of me left!

At the end of the banquet, these two ghouls above actually brought some Jello brains to the table where the celebrity guests were seated. Blood ran out of the mouth of the zombie waiter on the right, and hit at least one plate! Still, celebrity guest William Stout (noted artist and the production designer for Return of the Living Dead, among others) gamely ate a piece anyway! 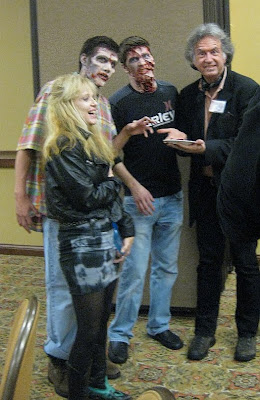 Above: Zombies, Linnea Quigley, Bill Stout, and brains on a plate.
Posted by Max the drunken severed head at 1:24:00 AM

Mmmmmm brains on a plate!
I'd eat them too!
Have I mentioned that I'm one quarter Zombie??? On my Mother's side. :P

Laura, do you participate in any festivals celebrating your heritage as a Zombie-Canadian?