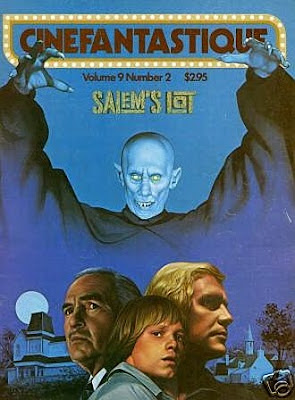 Yes, the new holiday you've all been anticipating for months has arrived-- TODAY is the very first INTERNATIONAL "TALK LIKE JAMES MASON" DAY!!!

James Mason--an unforgettable actor who memorably starred in movies like 20,000 Leagues Under the Sea, and was menacing on television in Frankenstein: The True Story and Salem's Lot, is our model for vocal impersonation today.

When holiday creator Callum Stewart is asked why the world needs this new holiday, he invariably replies "Why? Because James Mason's voice was awesome, that's why!" He's right, of course. 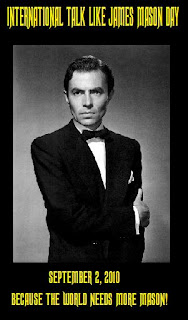 I decided to ask Mr. Stewart some questions about his idea. Here's our short Q & A:

How did you get the idea?

I was watching NORTH BY NORTHWEST, which is my favorite Hitchcock movie, by the way, and I was thinking about various other "talk like" days that exist: talk like a pirate day, talk like Batman day, talk like a pilot day, etc. and it occurred to me that if we should spend a day talking like anyone, then it should be the man who had the best voice ever.

What are your favorite James Mason performances?

He's great in everything he's in, but NORTH BY NORTHWEST (obviously) is one of my favorites. I also love his Watston in MURDER MY DECREE and his Nemo in 20,000 LEAGUES UNDER THE SEA. There's also an animated version of THE TELL-TALE HEART narrated by Mason and it's brilliant.
Name one or more movie or TV roles that are relatively current you wish you could see James Mason in.

Hmm... that's a toughie. I always thought he'd have made a great Bond villain. Can't you just hear him saying "No, Mr. Bond, I expect you to die?"
What did James Mason put in his Mason jars?

So boys and girls, celebrate by drinking some Thunderbird (you'll need it for courage) and putting on your most sonorous British voice. Talk like James Mason! Do it!

Today I shall go around repeating this line from Mason's performance as Dr. Watson in Murder By Decree: " Holmes, you squashed my pea." Why don't you join me?
Posted by Max the drunken severed head at 5:42:00 AM

Thanks for the article, Max! Hopefully next year Talk Like James Mason Day will be a national holiday and we can all get a day off work to watch MURDER BY DECREE and talk like James Mason!

Let me know when they announce Robert DeNiro Day. I've some great lines from his movies, particularly Taxi Driver and Midnight Run.

Thanks for letting us know, Max! I'll be posting a celebratory article over at the S&P... we gotta get the word out!

Oh my - a whole day when everybody sounds like Mr. Straker from Salem's Lot....that movie still creeps me out.

Nevertheless, I never tire of Mr. Mason's voice. You can hear more of his excellent Poe readings here:

He reads the actual story of the Tell Tale Heart and Annabel Lee. He really did have the most marvelous voice - and he wasn't too hard on the eyes either way back when...

Great idea. Has anyone told Eddie Izzard about this? :D