The passing of the King 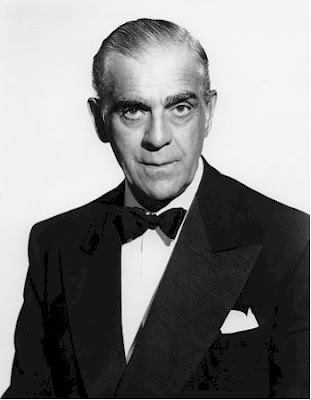 Not the 1940 film Karloff made with Bela Lugosi, but Friday, February 2nd, 1969. Forty-two years ago today--the day the King of Terror was taken by Prince Sirki, and all horror film fandom wept.

I know I did. I was 7 years old when my father told me my favorite actor was gone. I cried hot tears in my bedroom. I had looked forward to growing up with new Boris Karloff films! Wasn't he the man who vowed to never stop working? Hadn't Famous Monsters magazine informed monster kids everywhere of his future film plans? I couldn't imagine Forrest Ackerman no longer cheerfully reporting on Boris' busy schedule of appearances on TV and film. Karloff's workload was amazing for a man in his 80's, despite crippling, painful arthritis and debilitating emphysema. He seemed to be imbued with the immortal life force that Frankenstein's monster was given. But like the films Boris appeared in, that was only a wonderful illusion.

He was a man I wanted to be like. He was courteous, energetic, and dedicated to a profession that made others happy. Respected and loved, his life was productive, despite his ailments and in spite of his experiencing the tragedy of divorce. My young life had known a lot of illness, and my family had suffered through divorce. But Mr. Karloff had overcome these problems, so I believed life was not as scary as the films I watched Boris in.

And now he was gone, joining Bela Lugosi for a final time. My mother had died a year before, and the power of death to change life for the worse was absolute, it was clear. So I sobbed until I couldn't anymore. I lay on the bed, miserable.

Inside were new photos of Boris not run before. I lost myself in the pictures, imagining the stories they seemed to tell. Boris' baritone was speaking words of menace and power, and in the back of my mind was the thought that there were future issues of FM to look forward to. And no one ever died in Famous Monsters of Filmland.

I wish I still had that issue.
Posted by Max the drunken severed head at 11:35:00 PM

He had presence and the ability to command your attention.

Fantastic post, Boris would be honored by your devotion..... Just love that guy!

Sad, but a good tribute. Thanks for sharing your memory.

Thanks for sharing that story, Max.

For folks who want an of-the-time feel for Boris' passing the FM tribute issue, #56, is great; as is the Ackerman-edited PB anthology of essays that was rushed out, THE FRANKENSCIENCE MONSTER.

That is a great post.....thanks for sharing that. He was amazing, no denying that. A classic - always will be.

What a wonderful posting! from the Monster to the Grinch...it was not easy being green! I hope when he passed he knew how much he was loved by his fans!

I'm very happy to know that I could say something about Boris that pleased you. He was a role model as both an actor and a gentleman.

Thanks for the comments.